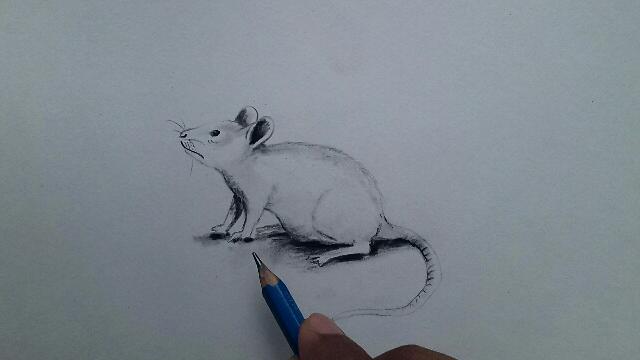 Today you will learn to draw rat drawing easy way. You have to complete this drawing in three steps; each step will be duly informed.

You have to complete the drawing by following it.

If you create a drawing of the rat with the help of a pencil, it would be better. If you want to color rat, then add the white color in the grey shades.

I’m telling you to portray this drawing through pencils. To create a hole image of the rat, I’ve only used the same pencil.

You can use any pencil you have.

Apart from pencils, I have used rubber, and the shading tool called blending stump has also been used.

I’m telling you first which potential problems you can face while drawing a rat.

If you are a beginner, you may have difficulty portraying the rat’s mouth. In addition, there may be some problems while drawing the rat’s foot.

You have to work with this in mind so that you will not be afraid to make further efforts if you fail in the first instance.

We should start the rat’s drawing from the back, not with the mouth. As we have mentioned before, the drawing of the mouth can be difficult.

First, we will start with ease so that we can maintain our self-confidence.

According to Figure 1, you will create a curve to make the back, which you made the curve will become the back of the rat.

By taking the right ratio, we will start making the lower portion of the rat, that is, the stomach and feet.

As you can see in Figure 1, the front leg is thicker than the top and thinner at the bottom, and the rear leg is made in rounding; you will create the picture accordingly.

So far, you have learned to draw outlines of the back of the mouse. Now we will make an outline of the rat’s mouth. As you can see in Figure 2, the ear is shaped first and then the face.

While forming the outline of the rat’s mouth, make sure that the mouse’s mouth is thin from the front and thick from the back. A slightly pointed rotation is to be given near the nose.

Now you have to make small points under the nose. Only 4 to 5 points are to be made, and then the moustache is to be represented as shown in the figure.

learn more : how to draw rose with pencil

In the second steps, you also have to portray the second leg of the rat.

Where you find the drawing lacking, you try to understand the ratio. Accordingly, you can correct your drawing.

Your drawing will be ready at this stage. At the beginning of this step, you will depict the rat’s tail according to the picture.

The rat’s tail is different from other animals. You have to draw small round stripes with a pencil; otherwise, you would make some hairs and straight stripes.

At the same time, the mouse’s second ear and the rest of the legs should be portrayed. They will also show the eye between the nose and the ear.

Now we will start shading.

The first thing to do is dark shade on the lower part of the rat, making the rat appear raised. In addition, you have to shade the back, inside the ear, and in the tail.

I hope you have been helped by this post. You can give us your suggestions and advice through comments.